Posted in After Action Reports | 18. December 2016 No comments

With already postponing once as our Allied stint did take longer than expected in C130, we were running very close into an anniversary squad night held during intermission. Thanks to Axis forces finishing the map mid week the new campaign, C132, started on Friday morning US time.

It was the best which could have happened to our squad night, fresh into the campaign!

We still had at least one hour to go until we would officially start but we already counted 17 WHIPS online at this time. Which was great!

We have spent the hour in order to prepare the squad night, meaning blowing FBs so we have a greater scale of potential targets and as well have the ability to do a fast switch if a target doesn’t pan out. Even an impatient Shini managed to survive the one hour. Thanks to Hastien, who was driving a lot, those FBs dropped quickly. And just in time as well. Once FBs were Axis we had 10 minutes left till we would officially start. Sko used the time to play with his sausage[s] and did some detailed how to later on TS :p

We then formed in Beauraing. I was happy when I saw it was Axis when I logged on. Beauraing has more or less became the home town of WHIPS before it was opened for recruiting in 2015. Without going into detail, it had a historical meaning to the squad founders. That as well was the reason for forming in Beauraing and not somewhere else. Funny detail here: Allies AO’d Beauraing when we were forming in Beauraing. Unfortunately they did not dare to stop by for a visit.

Once we seemed to be complete we had a 5 minutes speech session before we went out do leave some damage on the frontline.

Furthermore here are a few pictures from the gathering (click to enlarge, please check the gallery for all pictures): 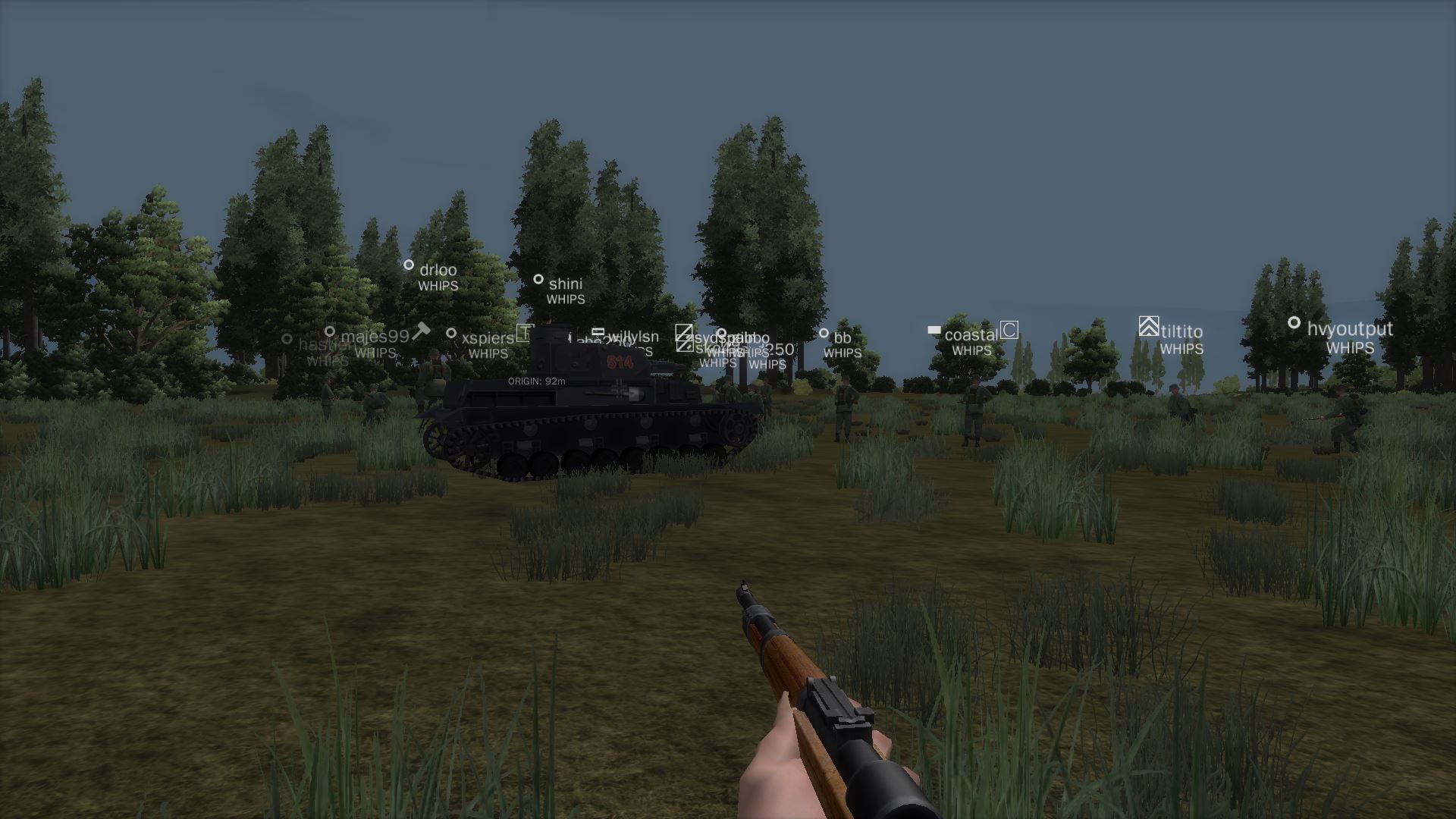 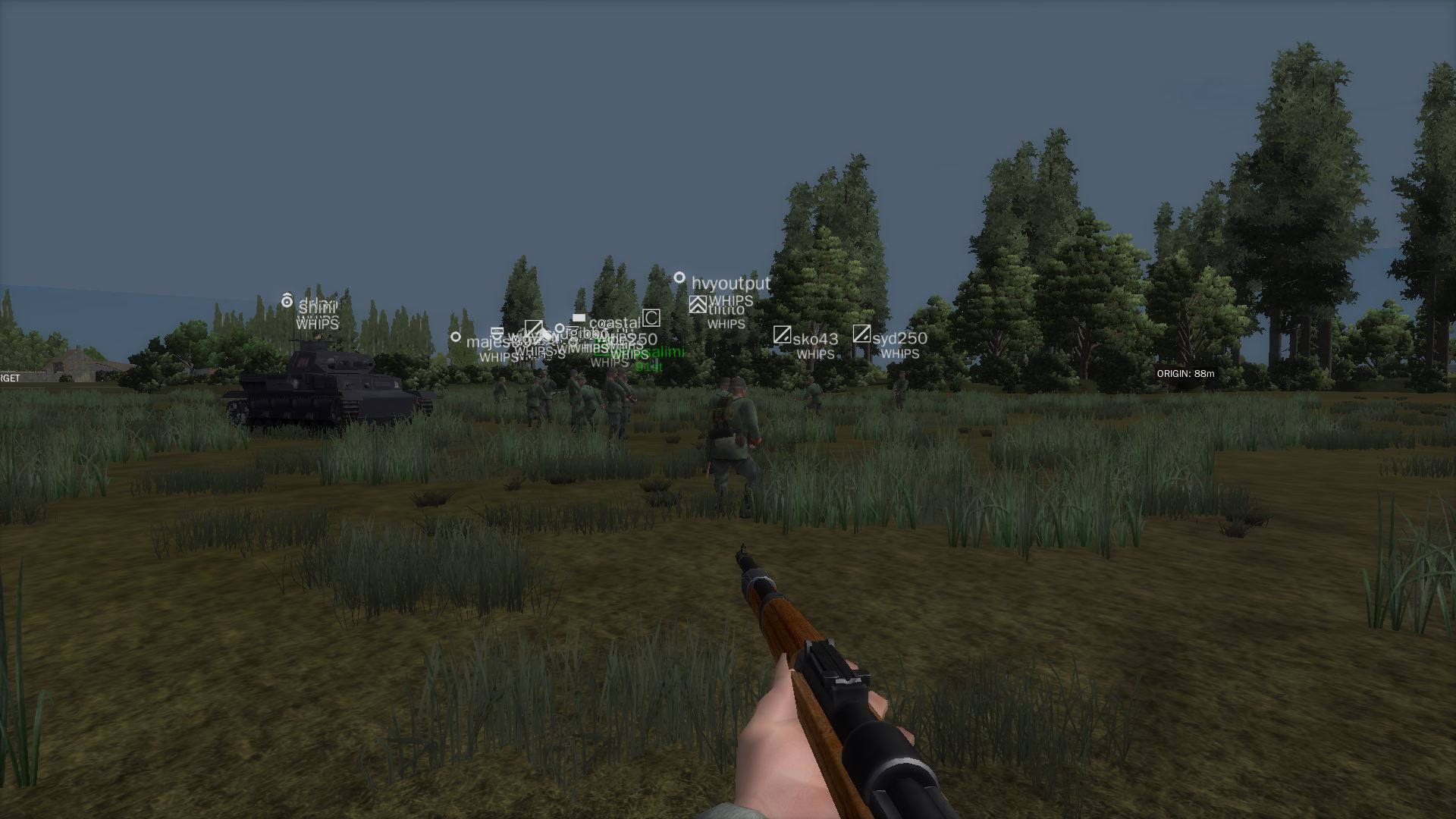 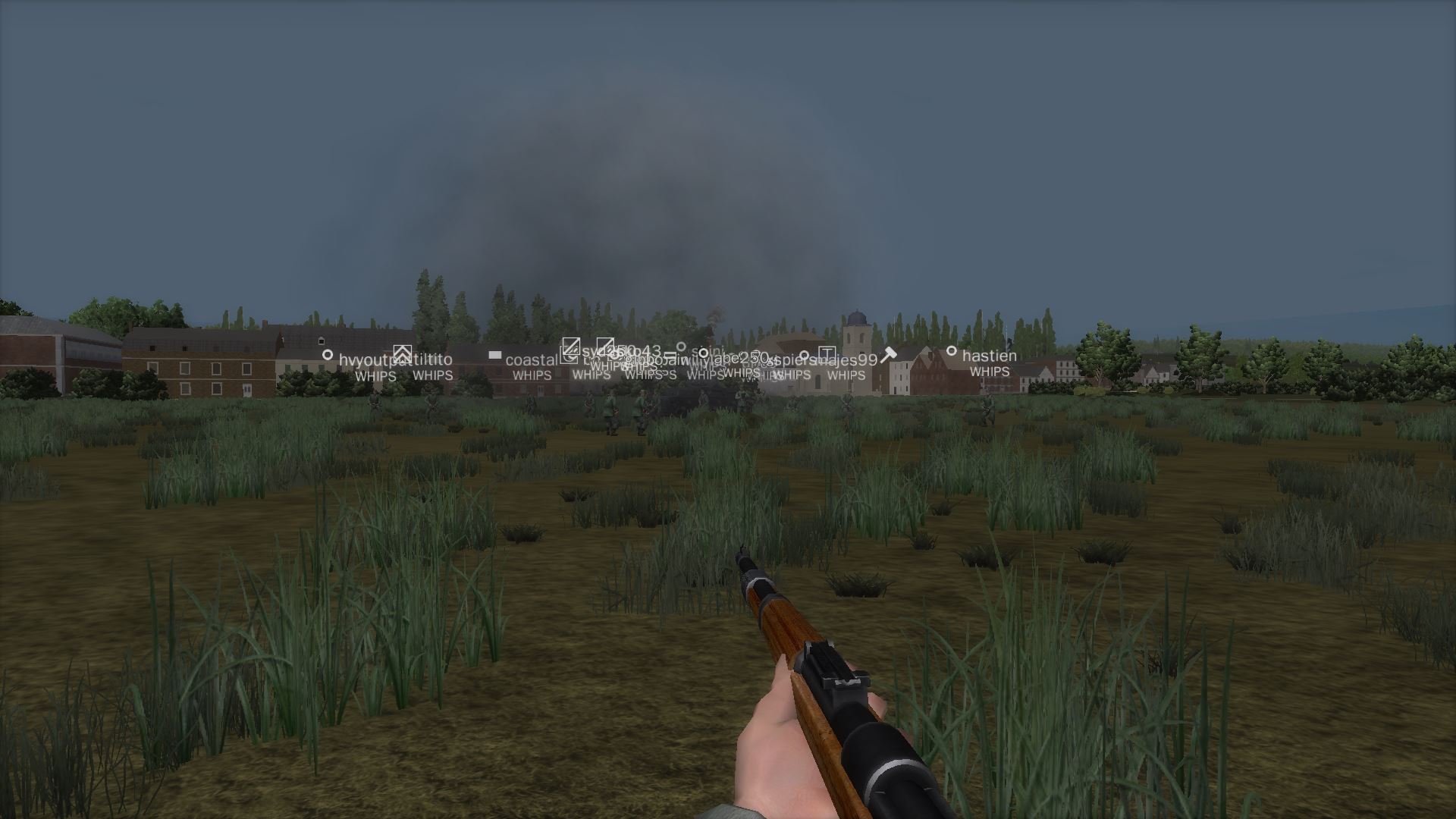 First target for our rampage was Gembloux! When we were gathering only Timbo was on. I did not even bother to ask him as he probably would have send us to a softcap. So I was looking for targets myself. I personally hate Wavre, it is always a tough town. But I thought if we get Gembloux first we might stand a chance against Wavre. While gathering, Tman logged on, who was ok with whatever we want to do. So Gembloux it was!

Once it was clarified that we get the AO, we rapidly moved out of the FB. Priority one were the two northern CPs as it would be easy to keep the town contested if we would own both cps. I do think we had 2-3 FMS for the norther CPs while Coastal went for mid town and deployed is FMS there.

Once AO was up,  Allies started to spawn. For a while it was almost WHIPS only to attack Gembloux, which looked kinda funny on the map. 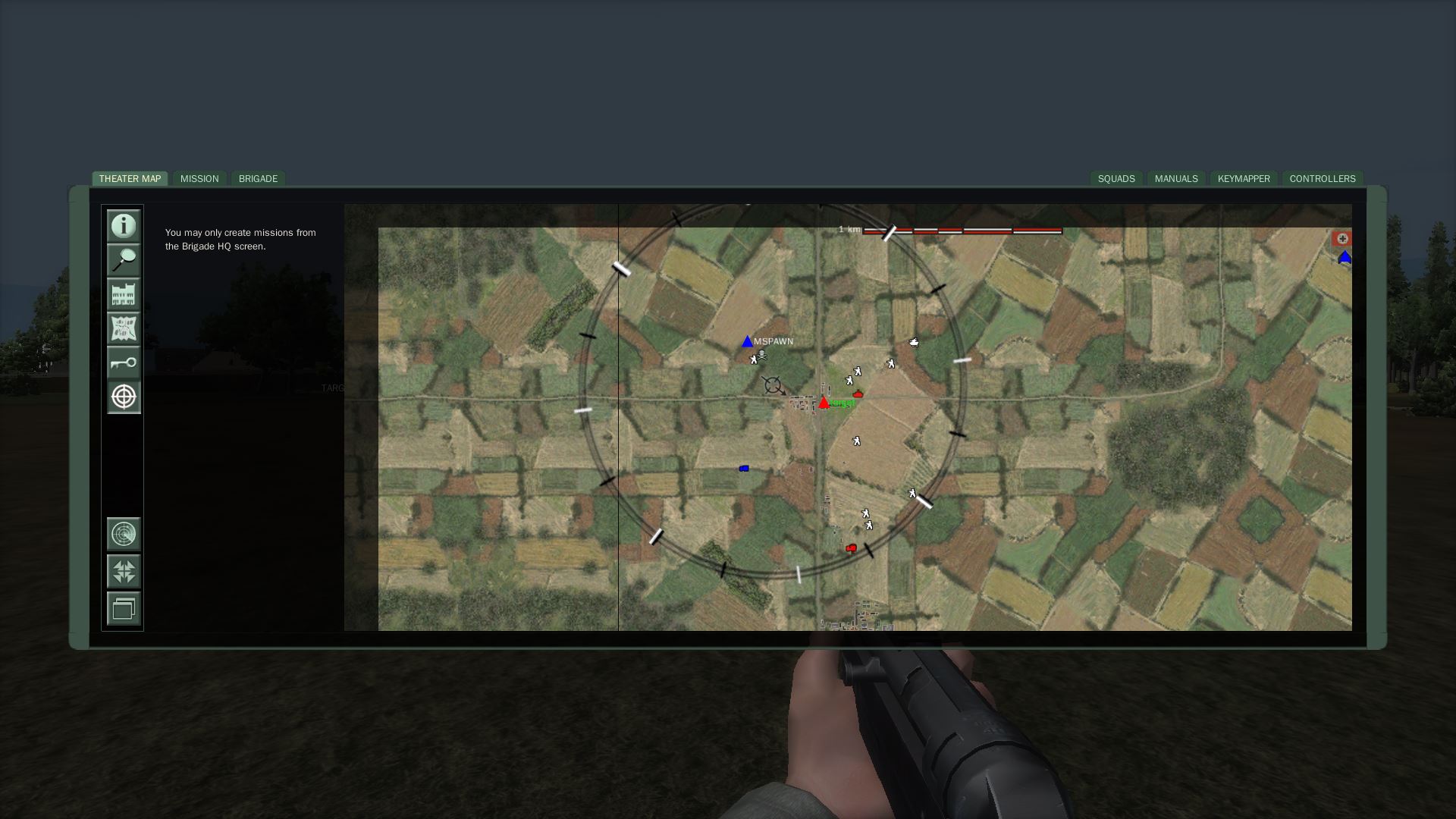 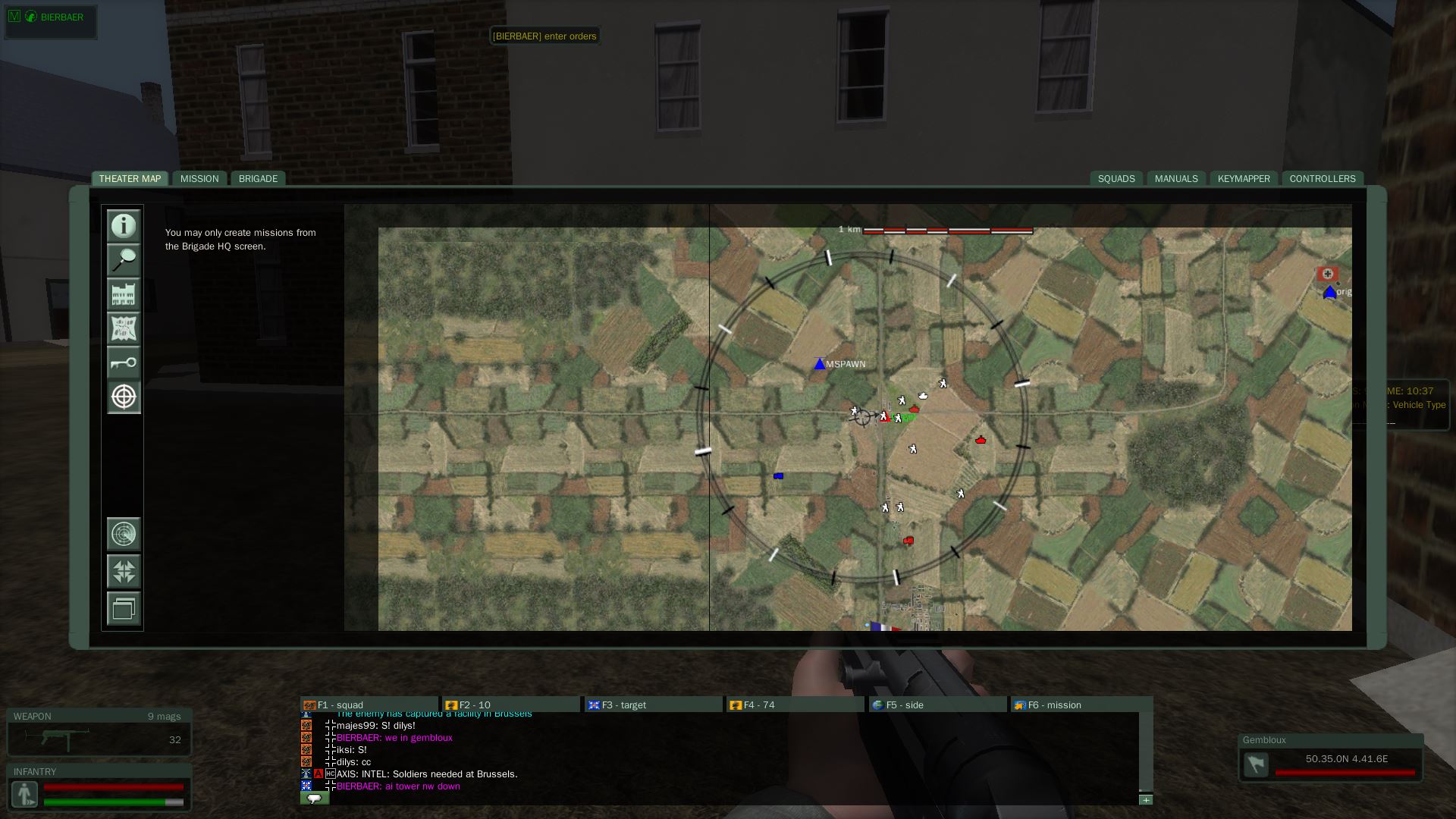 Which reminds me. I probably need to set squad color to ORANGE :p

Anyway, while we managed to cap the eastern CP rather easily, there was a tough fight going for the western CP, our spawnable. A couple times we managed to get a few guys in, capping for 30-40% to then get overwhelmed by Allied forces.

With the help of Majes FRU, which was a direct warpable FMS for the eastern north CP, we managed to keep them quite busy at the N CPs.

Thankfully to Coastal’s FMS we as well had squaddies and bluetags going for the remaining part of town (no screenshots as it was out of my range). In fact, 250H joined even in with a paradrop on the AB. This was absolutely great, as Allies were very distracted at the NCPs, trying to hold our spawnable.

From TS reports from Coastal I got that Allies reacted quite late in the AB, yet they managed to kill most of the bunker cappers because they did not follow DrLoo’s rule of thumb. Do not look out of the windows, regardless how alluring it might be.

I cannot confirm but I do think Coastal was the only one remaining finishing the AB cap, which of course was very important for the AO and the success of our squad night! Great Job, Coastal! With Namur CP already being Axis and we holding Wavre CP in the north, Allies were not able to spawn in town anymore. Gembloux was Axis in roughly 30 minutes!

While Hastien gathered people at our Jodo / Gembloux FB to hotdrop Wavre / Gembloux FB I joined them in walking from Gembloux to the Allied FB. We arrived at the FB at the same time. AO already had to be set in the moment we blew the FB because otherwise SYSTEM would have set one AO instead.

So we did not lose any time and headed for Wavre right away.  I set a FRU SE of town and had an ongoing stream of infantry players going into town.

In the beginning it once again was WHIPS only but bluetags followed soon enough. 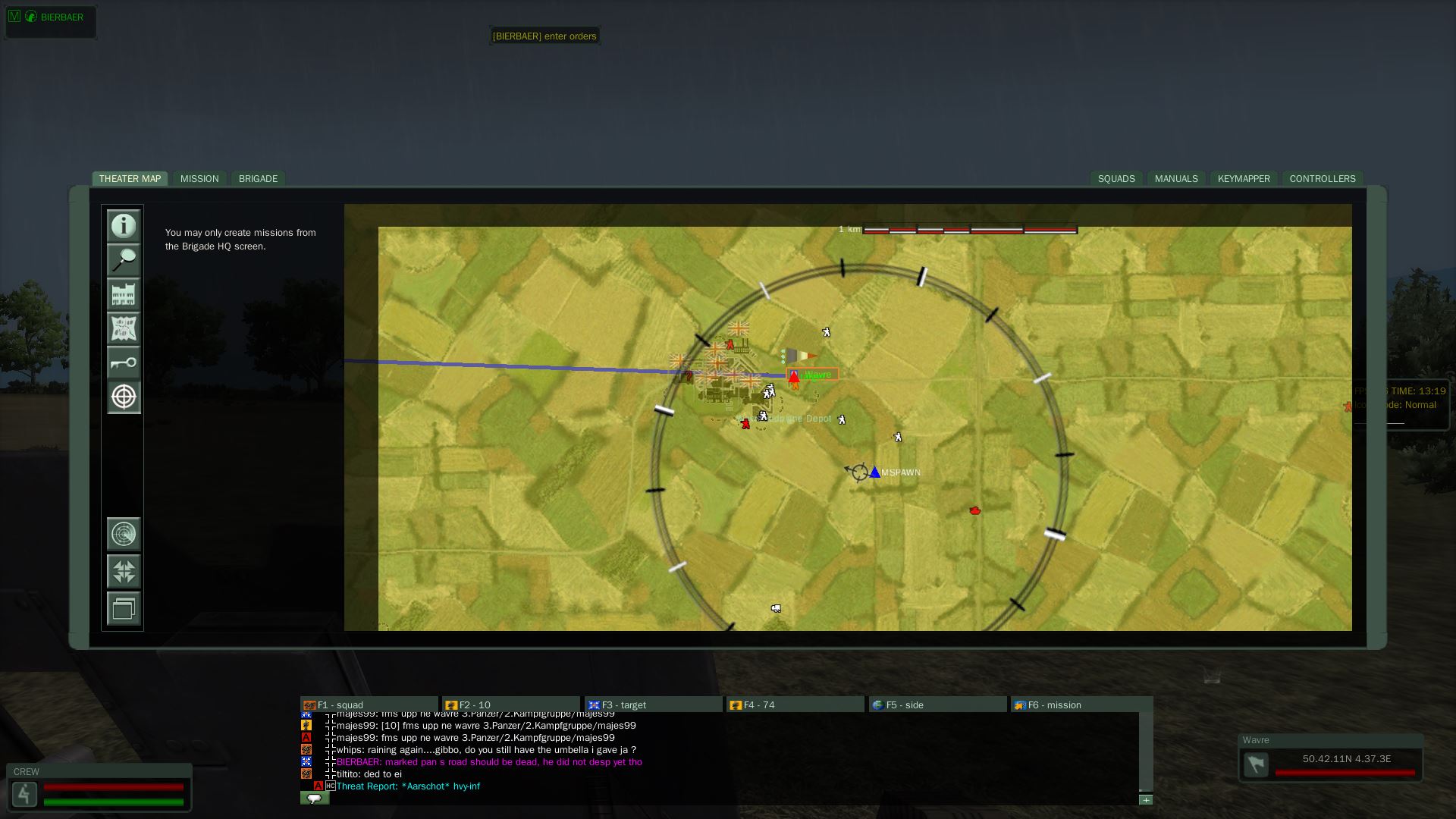 It was quite a skirmish for the spawnable. At some point I only tried to go for Gembloux CP as I thought this is probably not guarded at all but multiple times I never managed to get there. At my last attempt I just was about to pass Jodo CP to get to Gembloux CP when I saw Syd entering Jodo CP and starting to cap. So I thought screw it, gotta help Syd there. Shortly after 2 more bluetags joined in and it was clear that we had a solid base to cap that spawnable. More guys joined in and it was a matter of time when the spawnable would change ownership.

WHIPS received orders to go for the 2nd spawnable right away. DrLoo was holding our spawn while the rest concentrated to cap the 2nd spawnable. It went down fast. With both spawnables Axis, there’s only one option to go for next: BUNKER RUSH

So we did! Bunker was seconds from being hot and it was captured without any delay. After bunker WHIPS contiued to cap Allied Waterloo and Brux spawnables. With Nivelles CP and farm going Axis as well, Waterloo was Axis!

Just before finishing Wavre, Tman wanted to go for Namur while Allies commited their division to Spontin and therefore had a hard time to reinforce Namur. We had 3 FBs teams going for the Allied FBs as none of the FBs were Axis. Great job guys! We were on a countdown, as we only had 10 minutes to get the FBs before we had to set the AO. You guys got the FBs in time!

Once the FBs turned Axis, I had to take a break because I had a massive headache.

When I came back I joined Spiers JU right away while Majes managed to set a FRU SW’ish of town. Paras were 10k out when Majes and Co had the Eghezee spawnable capped to 60’ish %. Paras therefore dropped for Gembloux CP. I did not expect the high speed of the JU therefore my jump call was a second too late. But it was a perfect drop in regards to the alt. I know better next time! Good drop, Spiers!

With reinforcements from Eghezee spawn we managed to capture Gembloux spawnable as well. From there on we had a little bit of ping pong going on in regards of CP ownership. This is something we have to do better next time, with dedicated CP guards. Allies managed to keep a steady flow of fresh supply in, with dock captures and recaptures.

The only time when we really overwhelmed the Allies was when we got the  Andenne FB back. Thanks to NJ, who was running an Opel in order to hotdrop. Once we got this FB, the town fell rather quickly [of course with the huge damage already done beforehand].

Namur was a great way to finish the squad night, at least for me. It was getting late and my headache was still around.

So please go ahead and report if you did go for other targets afterwards. Screenshots and other stuff is welcome to.

Thank you very much for yesterday’s anniversary squad night! It was a pleasure and an honour fighting amongst you! Many thanks to our friends as well, especially 250H who where an amazing and essential help yesterday!